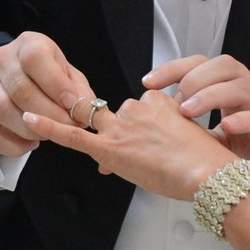 BOSTON — An Italian Jesuit priest known to be a confidant of Pope Francis says the pontiff thinks the Catholic Church can no longer issue general rules that apply to whole categories of people.

Jesuit Fr. Antonio Spadaro, editor of Italian magazine La Civiltà Cattolica, told a conference of bishops and theologians considering how to implement the 2016 apostolic exhortation Amoris Laetitia on Oct. 6 that the document recognizes that even people living in "irregular" family situations, such as divorce and remarriage, "can be living in God's grace, can love and can also grow in a life of grace."

"We must conclude that the pope realizes that one can no longer speak of an abstract category of persons and ... [a] praxis of integration in a rule that is absolutely to be followed in every instance," said Spadaro, who was one of the first people to interview Francis as pope in 2013.

"Since the degree of responsibility is not equal in all cases, the consequences or effects of a rule need not necessarily always be the same," he said.

The two-day conference at Boston College is co-hosted by theologian Jesuit Fr. James Keenan and Chicago Cardinal Blase Cupich. During the event, two cardinals, 12 bishops, and 24 other invited participants are discussing what organizers call the "new momentum" Amoris Laetitia gives local bishops to renew their pastoral practices toward families.

Spadaro spoke during the fourth of five panel discussions at the event. Considerations on the second day focused widely on the call Francis makes in the apostolic exhortation for bishops and pastors to listen to laypeople and respect decisions they make about their lives after undertaking a process of discernment.

Spadaro referred to a set of guidelines bishops in Sicily issued in June for how Amoris Laetitia should be implemented in their region of Italy.

"The Sicilian document concludes with clarity that in some circumstances as regards the divorced and remarried, according to the evaluation of the confessor ... it is possible to admit absolution and to admit him or her to the Eucharist," he said.

"It is no longer possible to judge people on the basis of a norm that stands above all," he concluded.

San Diego Bishop Robert McElroy spoke to the conference about his recent experience hosting a synod in his diocese that sought to put the teachings in Amoris Laetitia in action.

McElroy detailed how the diocesan synod involved discussions among 142 delegates, including one lay delegate from each of the diocese's 99 parishes. He said going through such a process "teaches bishops about how lay men and women wrestle with the issues that we write and speak and teach about."

"I was a learner and the most fascinating thing to me was how they thought through things because it was different in some areas than I would have thought," he said. "It is a moment for the palpable presence of God to touch the church."

'We can't arrive with answers from a textbook'

Richard Gaillardetz, a theologian at Boston College, spoke to the conference Oct. 6 about how the process of the 2014 and 2015 Synods of Bishops at the Vatican that led to Amoris Laetitiashows that Francis has a horizontal, and not a vertical, understanding of authority in the church. He said the pope does not see authority as only handing down decisions but "imagines a more pluriform and multi-directional exercise of authority."

"Francis has made listening a central epistemic practice in the church," said Gaillardetz. "[He] is inviting the church to see attentive listening as ... a privileged process by which we access the truth God wishes to share with us."

He said the pope wants to create wide consultative processes in the church, does not want to hear only from those who agree with him, and does not seek to gather "safe voices into an ecclesiological echo chamber."

"The pope rightly insists that authentic ecclesial consultation ... must attend to a wide arrange of voices, including those who bring harsh criticism and disagreement," said Gaillardetz. "Amoris Laetitia is both the fruit of that kind of listening and an invitation for that listening to continue as we seek to implement its vision."

"In its determination both to accompany people ... and to listen to peoples' insights, laments, and concerns, Amoris Laetitia is not just the fruit of two synodal assemblies," he added later. "It is an apt reflection of and for a synodal church."

"This remarkable document invites us to see the wisdom of listening before speaking, learning before teaching, praying before pronouncing," said Gaillardetz. "Only out of the deep humility of a truly synodal church can the good news of Jesus Christ reverberate with clarity and power before a world hungry for a word of hope and an offer of salvation."

In remarks to the event Oct. 5, Cardinal Kevin Farrell focused on how Amoris Laetitia asks pastors to engage in a process of dialogue and discernment with laypeople in order to understand their needs.

"We need to take time to listen," said Farrell, who leads the Vatican's new Dicastery for Laity, Family and Life. "We need to give our people quality time if we're going to speak to them. We can't arrive there, as many times unfortunately happens, with all the answers already in a textbook."

"We have to develop a habit of giving importance to the other person," he said. "This is what Francis wants. ... We need to do this. We need to show affection and concern for other people for worthwhile dialogue."

"We cannot dialogue with people if we already know all the answers to their problems," he said.

Farrell also said that he thinks the work of marriage preparation and accompaniment of married couples in parishes should primarily be led by laypeople.

"Marriage preparation and marriage accompaniment should not be done by priests," he said. "I am a firm believer in that. Priests do not have credibility. They have never lived in the reality of the situation and therefore it's very difficult for them."

"Laypeople need to be trained and need to do this kind of work," he said. "They are who can best accompany married couples in moments of difficulty and moments of challenge."

Farrell began his address with a reflection on the different way Francis has acted as pope compared to his predecessors John Paul II and Benedict XVI. He called the three popes together akin to a "triptych."

John Paul II, he said, focused on clarifying the church's teachings following the 1962-65 Second Vatican Council. "He wanted to codify everything," said Farrell. Benedict, he said, wrote three encyclicals on the core Christian virtues of faith, hope and charity and "wanted to describe why we believe what we believe."